School Yedidia ( Yedidiass = Yedidia secondary school) is in Tanzania in the District of Mbulu, in the area of Maretadu. This area is not surrounded by villages or cities. The closest larger towns are Dongobesh and Haydom.  The name of the school comes from the Bible and means the friend of God, God’s favorite (See 2 Samuel 12; 24-25.)

The school was established in 2003 with 22 students (9 girls and 13 boys). It was established by Paulo Bura Hhoko, the director. He was trying to help young people without secondary education, who wanted to study but did not have an opportunity.

At the beginning they were using a classroom in a primary school,  later they met in the church.

Paulo had a small group of coworkers in 2004. They requested the authorities for a piece of land for the school. They got a three acre plot (1 acre = 0,4 ha) They built a small house from 16 metal plates and bricks made of mud, called “boma“ in Swahili. Later they started saving, collecting bricks, rocks to afford another part of the building. The construction material was transported in a carriage pulled by cows. The building with two classrooms and three rooms for teachers were built in 2009.

Currently, the school has three classes – separate buildings, a dormitory for 2 – 3 teachers, a science laboratory and dormitory for girls in the process of construction.

The completion of the laboratory was the key to get the school registration in Tanzanian High School Network. This also allowed the school to organize National examination for the second, fourth and sixth form. Yedidia students can obtain full secondary education because, from 2019 onwards, after passing the fourth year of National examination, they can continue their studies in the fifth and sixth form.

In beginning of February 2020, the Tanzania Ministry of Education confirmed full registration of the school. Yedidia is a non-state high school. What they did for a long time and what they prayed for it happened. This position entails certain advantages but also obligations. The main advantage is that they will be able to choose better pupils from primary school graduates for the first form. Obligations include that supported students have to live in a dormitory where their behavior and discipline will be monitored.

Nowadays, there is a well in the school grounds. So far they had no source of drinking water. They collected rainwater for watering plants and carried water in barrels from a distance of about three kilometers. This water is strongly mineralized, it also damages plants. To drink it, they boiled it. The presence of water will strengthen the school’s self-sufficiency and financial independence. In addition to school cooking, it could also be used for growing fruit and vegetables for its own consumption but also for the local market. In Yedidia they plan to establish a new orchard.

School management sees the well and full registration of the school as a huge gift of God.

Thanks to our support, the school has developed to the level of a registered school in Tanzania. If we add to that a science laboratory, classrooms, a well in its campus, an upcoming dormitory and a planned orchard, it has a good foundation to prosper and be self-sufficient.

We will continue to support it in some projects, pray for it and bless its leadership and students.

Yedidia with the teaching staff. The headmaster of Paulo Bura Hhoko is the third from the right. 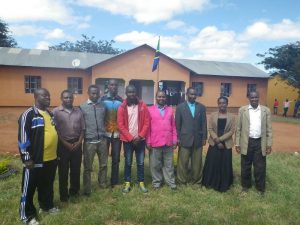